I’m safe and sound in Okinawa, Japan! After two layovers and about 22 hours in the air, I landed in Okinawa around 10:30pm Wednesday (8:30am Wednesday in Texas). Bagpiper picked me up at the airport (he hitched a ride from a fellow bandsmen and his wife) and they drove us to the hotel on base.

We’ll be in the hotel for the rest of the week and then we’ll move into our off-base house. And in case you haven’t seen a picture of our house… 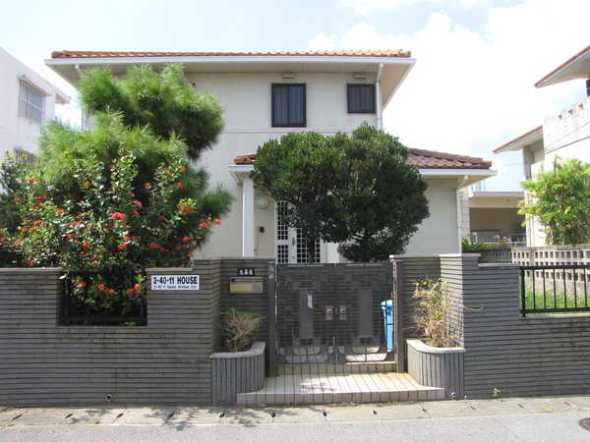 I'm not even joking. This is seriously our new home.

It’s a two-story Japanese-style home. Two bedrooms, an office and 1.5 bathrooms. Oh, and it’s about 25 yards away from the beach. How amazing is that? We get to move in on Monday, but the Bagpiper is going to try to take me to see the house this weekend.

Meanwhile, I have a lovely view of Camp Foster from my hotel window:

I have not done any official site seeing yet. I got in too late last night, and frankly, after all those hours on airplanes, all I wanted to do was lay down comfortably in a bed and sleep next to my hubby. So far, I have not really experienced any  jet-lag. I’m now 14 hours ahead of CST, but I’m glad I got in so late last night, because (hopefully) it will help me adjust to the time difference.

That’s all I have to report now, expect more updates and pictures soon!

Less than two weeks to go!

It’s been a couple of weeks since the Bagpiper left for Japan. We talk regularly on Skype and on the phone (thank God for international plans!) and he’s doing really well out there.

He says it’s gorgeous; I can’t wait until I’m there to share it with him.

Surprisingly, the Bagpiper didn’t have much jet lag, even though there is a 14 hour time difference. He said he slept the first day, but after that he was good. I think this is partially because he’s anxious to get everything set up before I get there. Speaking of which…

…my flight is reserved for May 17! That’s less than two weeks away!

I’ll fly to Minneapolis first, then Tokyo and arrive in Okinawa late on May 18. It’ll be a lot of time flying, but I’m excited. I plan on filling my eReader with plenty of books so that I have lots of choices to read. I also have some knitting, so I can knit some baby bibs on the plane too.

I’m entering my 8th week (I think), and the nausea comes and goes, but overall I’m doing well. I’m sleepy a lot, so I’m taking a bunch of naps. Once I’m in Okinawa, I’ll make my first prenatal appointment and find out exactly how far along am and all that stuff. I just don’t want to start in Texas and then switch doctors in Japan. To me, it makes more sense to wait an extra week.

I also haven’t begun to practice Japanese. I’m waiting until after Monday — after I take my French final. Then I’ll start studying Japanese. It’s too much work to try to learn two languages at the same time.

Other than that, there isn’t a whole lot going on. Just waiting….and time is going soo slowly.

I’m ready to be with my husband.

I just received a message from the Bagpiper.

He’s just landed safely in Tokyo. He got to watch “Deathly Hallows” on the plane and said it made him think of me, lol. He’s got an hour layover and then will take his last connecting flight (about two or three hours) to Okinawa.

He said he tried to call, but that dialing internationally was confusing and he was too tired to keep trying to figure it out. Once he’s in Okinawa he said he’ll try to Skype me, but it might not be until tomorrow (Friday for me, Saturday for him).

Current time in Japan is about 9am Friday. He’s in the future!

Just after midnight this morning, I received a call from the Bagpiper. He landed safely in Seattle.

He had a four hour layover, so I imagine now he’s on a plane en route to Okinawa. I have no clue what time (for me) he’ll be landing, but he’ll at least send me a quick text message or email from the airport when he lands (I’m not sure how the cell phone will work, I imagine he’ll be roaming, but at least I’ll know he is safe).

Once he’s there, he’ll find out where he’ll be sleeping for the next two weeks (it’ll take about that long to get set up for base housing) and then he’ll set about the task of fixing whatever paperwork needs fixing. I hope he gets some rest first…I’m not sure he took jet lag into consideration when he left.

I’m off to class to take an exam, work on a project and make a presentation — all while wondering when I’ll hear from the Bagpiper.

My life is super busy, but I wouldn't change a thing.

The Bagpiper flies to Japan today.

For awhile it was touch-and-go as to whether or not he would leave today or in May (lots of confusing back and forth), but this morning he called in and they told him that yes, he would be flying out today as originally planned.

Basically, he’s flying out and the paperwork he’s missing —which, technically, he needs this before he can fly out — he can get sorted out when he’s over there.

Such an organized system, no?

Meanwhile, in case you missed the news on Facebook….

Yep! I’m estimating that I’m right around six and a half weeks pregnant, but since most OB/GYNs require that I’m at least eight weeks before I can get my first prenatal, I’m just going to wait until I’m in Okinawa before seeing an OB. This way, I can have one doctor throughout my entire pregnancy.

I should be around nine weeks by the time I flyover seas, so it’s perfect timing. If I fly any later, then I will see an OB here and just explain to them that I’ll be leaving shortly.

But before I worry about that, I have to make it through finals and graduation….

So that’s what’s going on. Lots of big things happening all at once! School projects/tests, Bagpiper leaving, finals, graduation, my flight and a first prenatal visit….all in May (except Bagpiper leaving, but it’s almost May).

My brother also returns in May (hopefully, we’re still waiting on official word on that), so I’m hoping I can see him before I leave. He’s currently in Florida (and judgeship by his Facebook posts, he’s loving it), and will find out next week when he comes home. Here’s hoping it’s not on the same weekend as graduation — cause that day will be busy enough!

Whew! Life just doesn’t slow down, but I wouldn’t change a thing.

Down to the wire…

This week is going to be ridiculous.

Here’s a run down of what my week is going to look like:

The rest of the month through May will also include things like: