The trouble with Tribbles…

Brr! It’s been a chilly week in Texas; look, we even got snow: 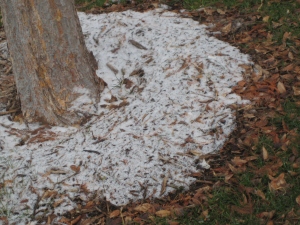 OK, so many of you probably don’t think that light dusting is even considered snow, but trust me…people in Texas are freaking out over it. Imagine last year when we had nearly a foot of snow on Christmas Eve! Crazy times.

So with the cold weather and the “snow”, I’ve been spending as much time as possible indoors where it’s nice and warm. The majority of my time (when I’m not in class) is spent in my crafty room, knitting and watching whatever is in my Netflix instant queue (btw, God bless the soul who invented Netflix — they are a genius). Add a mug of hot chocolate in a “knitted” mug, and you’ve got one super amazing afternoon. 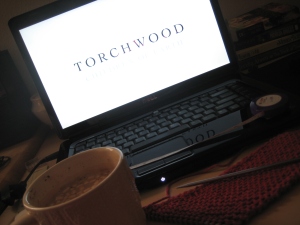 Finished a Tribble as well as "Torchwood: Children of Earth".

This past week I finished up some WiPs I had on needles from 2010, among them a dishcloth I started sometime in August (?!) and never finished. Terrible. After the dishcloth (pattern: Waffle Dishcloth), I finished a Boucle Shawl (actually began this 2009!) and then began casting on for Tribbles.

I always love knitting things for my kitchen (kitchen towels and dishcloths), but I’ve never knitted a Tribble. The pattern’s been in my Ravelry queue for ages, and I finally cast on for my first on on Saturday. I knit one Saturday, half of one Sunday (finished it earlier today) and I’m halfway through a third. You couldn’t ask for an easier, quicker knitting project than a Tribble.

There are definitely a plethora of Tribbles in my future. The only trouble with Tribbles seems to be how addicting they are to knit. 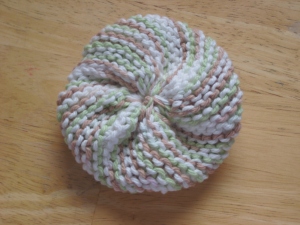 After this third one, however, I’m going to cast on for the Shroom hat. It’s part of a Tumblr KAL for January. Most people, I think, seem to be done with theirs. I hadn’t started because I didn’t have the right size needles. Bought what I needed today (with birthday money I received yesterday) and I’ll be casting on later tonight.

I may not like the cold, but it’s definitely good for my knitting!

What are your first projects for 2011?